Stadtarchiv and Landesgeschichtliche Bibliothek Bielefeld preserve the historical heritage of the city in the form of unique archival documents and books, mediate it in the present and pass it down for the future. The archive is, as experiential place of the city history, the central memory and historical information memory of the local society. Urban and village life, political and cultural events, economic and social action are exclusively here permanently and complexly comprehensible for everyone. Stadtarchiv and Landesgeschichtliche Bibliothek Bielefeld are an intelligent “mass organisation”. About 45 million sheets of paper in files, 600 certificates from the year 1240 onwards, more than 65.000 photos, 7.500 posters and 6.600 maps, local and regional newspapers from the beginning of the 19th century onwards as well as over 100.000 books and 400 sequentially archived periodicals, containing information considering the history of Bielefeld, Ravensberg and Westphalia: Here, data become information, information become knowledge, knowledge becomes historical education.

The archive is the "memory" of the city. Here, documents and files from various centuries are carefully preserved. Our oldest certificate dates from the year 1240, the oldest files from the 16th century. The preserved documents reflect the communal, economic and social change in the region up to the present day. As many allegedly unimportant files were destroyed in past times the majority of our documents dates from the time since the industrialisation.

An overview of the holdings can be found here: https://www.archive.nrw.de/archivsuche?link=ARCHIV-DE-Bi5.

Documents of the city administration
The key task of a municipal archive is the preservation of documents that are no longer constantly needed in the city administration. These may be certifications, files, maps or plans or in today's time, of course, photographs and digital materials as well. However, not everything that was written down is worthy to be preserved for posterity.
It is the task of the archivist to make a selection from the wealth of files – documents, for example, that are of legal significance or files that can be interesting for future generations. Over time, this holding increased constantly. Especially since the industrialisation, the city grew and simultaneously its administration. After every incorporation, the archive's area of responsibility expanded. Therefore, our holding covers today the entire area of the city and the former district Bielefeld, including records from Heepen, Jöllenbeck, Gadderbaum, Brackwede, Dornberg, Sennestadt and Senne.

Documents of companies and individuals
The history of a city is not only shaped by its communal, but also by its economic and social development. For that reason, we store many records of important regional companies. Among those are inter alia documents of enterprises like the Ravensberger Spinnerei, the Dürkopp-Werke, the Ankerwerke, the Keksfabrik SUM and many more.
To the documents from the private domain belong family and farm records as well as estates of prominent personalities from Bielefeld, employer references, letters from the war front or diary entries. In the past, many people have entrusted their private records to us and contributed in this way to the development of this collection.

Documents of parties and associations
Parties and associations shape the social and political life in a city significantly. Therefore, documents of famous associations like the traditional Bielefelder Musikverein have their place in the archive, as do records from the „Volksbühne” or the „Arbeiterwohlfahrt” who originated from the labour movement. Illustrative for the decisive influence of political forces on life in the last century is, for example, the holding of the SPD-district Ostwestfalen-Lippe, stored in our house.

The Westermann-Sammlung (Westermann-Collection): A documentation of contemporary history
The linen merchant Otto Westermann from Bielefeld laid in the 19th century the foundation for the eponymous collection. Westermann gathered photographs and drawings, collected newspaper cuttings and letters, business cards as well as company and associaton journals of the city. After Westermann's death, his heir – the "Verein für die Grafschaft Ravensberg" – entrusted the collection to the city of Bielefeld and thereby to the city archive.
The collection, initiated about 130 years ago, is constantly updated and continued. It illustrates a multifaceted and versatile image of the city history and is a rich source of research.

The collection of newspaper cuttings ("Zeitungsausschnittsammlung")
For four decades, the collection of newspaper cuttings was continued in our house according to the proven principle of Otto Westermann. Interesting articles were cut out of the newspaper, categorized and stuck in a thematically appropriate volume. Over time, the collection grew to more than 360 volumes, divided into 80 subject areas. Since 1996, articles about important local events are recorded in a data file and made accessible via a computer. After consultation, the volumes can be viewed in our reading room.

The map division
The map division contains maps of all sorts. Old city maps testify, by comparison with newer maps, the changes in the cityscape of Bielefeld. Construction plans, farm and property maps reveal the former ownership structure or field names. Geological and geographical maps complement the holding.

The Collection of posters
At the end of the 19th century, poster became an effective carrier of information and advertisement - first in the commercial, later also in the political sphere. In the city archive, more than 6.500 examples of such posters are stored: Rare billboards belong to the collection as well as posters from the political or cultural fields.

The collection of photographs
A collection of more than 60.000 photographs, slides and postcards documents the transformation of the urban landscape. Among those are pictures and drawings of streets, squares and individual buildings as well as photographs of important events or prominent personalities from Bielefeld. The collection is constantly extended. For that purpose, many people provide their private material.

Preservation and usage
Documents that are intended for permanent storage are sorted and registered. Afterwards, the archival documents are handed over to our workshop where they are dedusted, repaired, put in acid-free boxes and transported to the store rooms. As paper reacts sensitively to environmental influences like heat and incidence of light the store rooms have to be dark and dust-free. A constantly maintained low humidity is also important. Our storage rooms are not publicly accessible. Only during guided tours, visitors of the city archive are allowed to take a look inside.
It is only allowed to view the archival documents in the reading room. Our finding aids, indexes and data files provide indications as to where the wanted Information can be found. We make a great effort to treat the documents carefully, in order to ensure that they can still be viewed in some hundred years' time. As our documents are unique, we also ask you as user for careful handling. 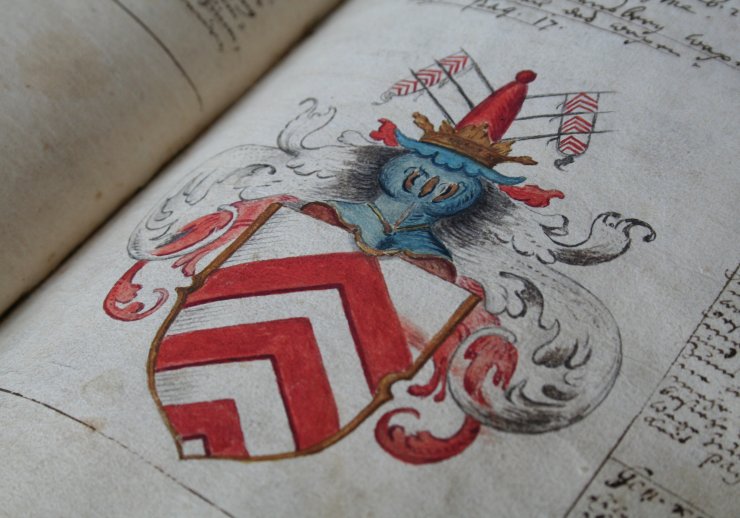